A rather sophisticated yet rebellious lifestyle blog

“I go to seek a great perhaps.” -John Green

My journey between Paris and Vienna spanned across three countries and included three strikingly different cities. Despite residing in three different countries, each city had a common thread. Besides being of Germanic influence, they were all simply little towns. 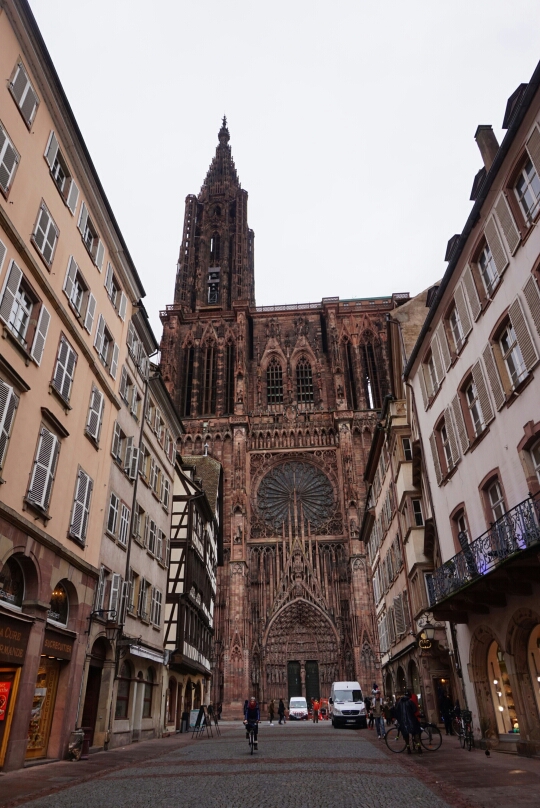 To arrive in Strasbourg, I did what any normal, single, solo female traveller would do: look up a ridesharing service and hop aboard one that seemed to fit my time frame.

Bla  Bla Car is a ridesharing service offered throughout many countries in Europe. For those of you unfamiliar with it, it’s kind of like Über, but for carpooling to other cities. Anyone can sign up to give or reserve a ride and each seat in the car is offered for a price. Some drivers only offer one time services while others offer their services repeatedly. Those who make reservations can even review the driver.

I’ve had a few friends who backpacked across Europe tell me about this mode of transportation and I wanted to try it out for myself.

My first carpooling experience with Bla Bla Car was a fairly unique one. I contacted the driver, who was coming from Nantes and he gave me the general pick up spot. I did my best to get to that particular spot, yet for some reason I ended up 500 m west of where I needed to be. After whirlwind of emotions and exercise, I called the driver and asked him to wait 10 more minutes (I was already 10 minutes late). He said to hurry because he had many people waiting. My non-English speaking French taxi driver must have read the desperation on my face because he got me to where I needed to be licketty-split.

Although I had a general idea of what kind of vehicle I was going to be climbing in to (blue Volkswagen van), I had no idea it would be packed with 7 other travelers (excluding the driver and myself).

The only people who spoke English fluently seemed to be the driver (who was a little eccentric and felt i would be overjoyed by his Bob Marley music collection. Later I found out along my journey one of the other passengers could speak broken English and another girl was fluent (and these two became my saving grace later on).

We were dropped off at a bus station on the outskirts of Strasbourg. I had to purchase a bus ticket and figure out the location of the bus station in terms of my hostel (thank goodness for CityMaps2Go!). To my delight, Strasbourg was a lot smaller than I had imagined it to be and the area is extremely walkable. 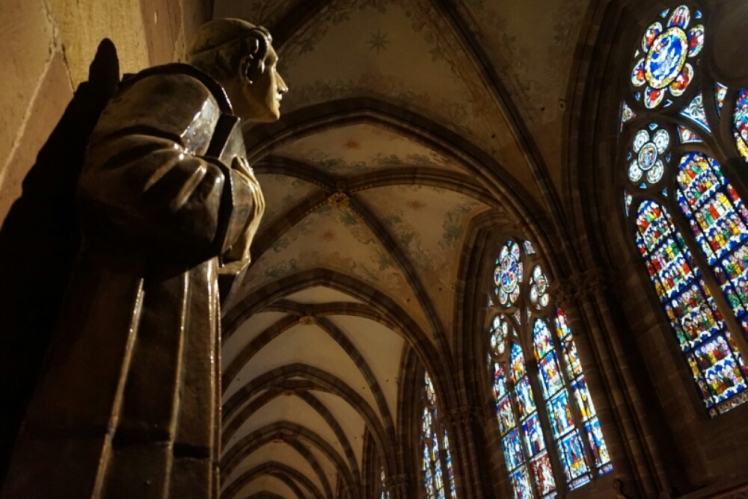 After checking in to what I presumed was the largest hostel in all of Europe, and dropping off my luggage I made my way to the most recommended restaurant in the whole town.

Eating alone has its pros and its cons. Pros: you can manage to get a lot done if you love writing or surfing the internet, waiters can be very friendly and more likely to strike up a conversation with you, and finally, tables are easy to come by. Cons: waiters sometimes forget about you because you are alone and not demanding too much, and it can be kind of lonely with no one to talk to.

Writing alone at my table, two Dutch girls sitting behind me took notice of me and asked if I was in the mists of writing a novel. Although it’s a dream of mine, I was only simply journaling. Soon enough we hit it off and managed to talk for over an hour sharing traveling stories and riddles.

That day I met a number of people it is unlikely I’ll ever get the pleasure of encountering once again. Their amiable and adventurous spirits are what brought us together. Those moments are the ones I cherish most when travelling anywhere, even to the ordinary places such as the grocery store. Taking that leap of faith, chancing it, and giving someone a chance to be a part of your life if only for the extraordinary moment of encountering one another.

I have yet to meet anyone who wasn’t important.

Seeing Strasbourg took all of 5 hours for me the next day. I think I circled the city twice. 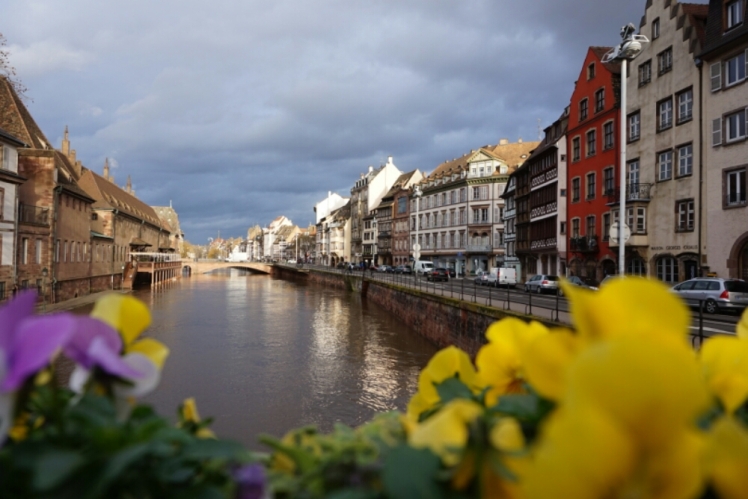 In a way I forgot where I was. Everyone spoke French yet the beer was German and all the buildings looked as if I was wandering around an old German village.

I was happy to go, and just as pleased when it came time for me to take my next Bla Bla Car to Zurich.

I felt much more prepared as I was dropped off at the Zurich central train station. My driver was a French man who was on his way for a job interview. I was his only passenger, so we got to know each other a bit. Instead of Bob Marley, his preference for music was which ever radio station played the most static over the actual music.

I’m not sure why, probably because I’ve never done any real research on Switzerland, but for some reason or another I had no idea they spoke German (I thought they had their own Swiss language) and I believed Zurich to be a larger city. Instead it’s only a city of about 350,000 occupants. The whole country population only totals about 8 million.

After feeling like the Energizer bunny, always going going going, I started to slow down in Zurich. The full day I had there, I woke up late, did laundry, and then took an adventure to their highest peak Üetliberg in the afternoon.

On that mountainside I felt like a kid again. There was snow on the ground and as I was hiking around, it commenced snowing some more.

I’m from Texas, so snow to me, is pure magic. I only ever see it maybe once a year and with this being one of the warmest winters on record, I sure I won’t see it there once I get back.

Once I made my way back down the mountain, I sauntered through the streets of Zurich.

I ate dinner with a guy I met at the hostel, something I named “our first and last meeting” trying to give it a serendipitous edge, while still trying to maintain the idea I wasn’t trying to be anything more than good company to keep.

I stayed up until 4:00 am that night. After visiting the main pub street of Langstresse in Zurich, I got to my hostel starving and ended up eating a sandwich amd some chips bought at reception and then discussing politics with the night owls still hanging out in the common area.

9:00 am the next day I woke to pack my bag, check out, and head over to the main train station of Zurich. Not only was I meeting a friend of a friend in order for her to show me around, but I also needed to purchase my train ticket for my travels later that day (I have a problem, and it’s that I really don’t make advance arrangements for anything anymore based on the fact I don’t want to feel constrained by time).

As my luck would have it, after an enjoyable morning strolling around Zurich getting to know my new friend, I barely made my train. I mean, I made it with maybe five minutes to spare. I had gone ahead and reserved a seat like the nice Swiss infomation man advised me to do and when I got to my train car and looked down at my seat, there was none other than a lady occupying what should be my space and her giant rolling luggage occupying the space next to it.

Of course she only spoke French, so after a little dibackle and some ticket checking did she move her luggage and allow me to rest in that space.

And this was my train ride to Salzburg, Austria. 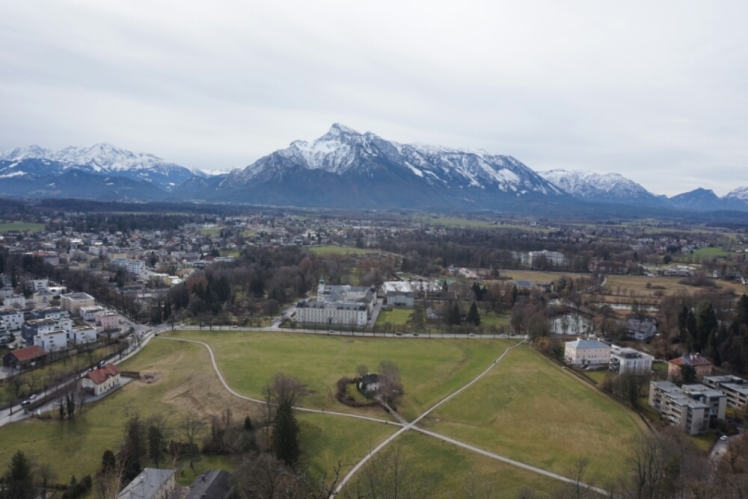 Despite the dramatic beginning, the ride to Salzburg was amazing. The sights were unparalleled. I saw Zurich from across the lake, we passed through small villages in the valleys and the snow-covered Alps and I couldn’t seem to pull my face away from the window until nightfall when nothing of the landscape could be seen anymore.

Like many of the places I visited on this trip, I did not do a lot of research (I only booked my plane ticket a month and a half in advance so I didn’t exactly have a huge plan going in).

Most places were just stops along the way to the destinations I really wanted to see.

Salzburg, Austria is the birthplace of Wolfgang Amedeus Mozart, and also the main filming location of the classic Sound of Music. I didn’t know how important Sound of Music was to this city until I saw on my hostels website that their selling points included their proximity to the Do Ray Me steps and the fact they play the film every evening in their common room.

The town felt as if it were a park with little homes and businesses scattered throughout it.

I’m sure I ended up hiking about 5 miles that day. There’s a giant mountain where the city fortress overlooks the land. It also divides the city into two halves. I hiked up to the fortress, around the fortress, down the mountain, over to one side, around a pond, back to the top of the mountain, zig-zagging along the top until making my way back down to where I started.

Of course I divulged in delicious Austrian food the whole time I was there.

How’d I end my day? By eating beef goulash, drinking Steigl, and watching the Sound of Music of course.

When in Rome, c’est la vie.